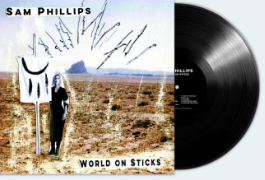 WORLD ON STICKS BY SAM PHILLIPS AVAIL FOR PRE-ORDER

She scored the music for Gilmore Girls and the Emmy nominated Marvelous Mrs. Maisel and now artist Sam Phillips is returning to her roots with World on Sticks an album of all original songs due out on September 28.

Her last physical album, Push Any Button, was released in 2013, but in 2016 Sam put out a digital EP, Human Contact is Never Easy, which featured 8 tracks, 4 of which will be on World on Sticks. Fans can pre-order the much-anticipated album on her website, samphillips.com, and will receive exclusive bonus tracks. Watch the video for “How Much is Enough” here.

Phillips had never worked on television scores before she was hired by creator Amy Sherman-Palladino to compose the music for Gilmore Girls in 2000. Over the course of the original seven-year run, Phillips’ music was as much a part of the show as lead characters. Sherman-Palladino went back to Sam and her husband Eric Gorfain when she launched the Amazon series, The Marvelous Mrs. Maisel, which Hollywood Reporter called “a sunny funny place.”

Retuning to writing her own music was a journey for Phillips, who said on her website, “As I wrote these songs I wanted to look at our lost connections…with nature, with mystery, with other humans and parts of ourselves.”

Pre-order World on Sticks on samphillips.com, Amazon, iTunes and Bandcamp.