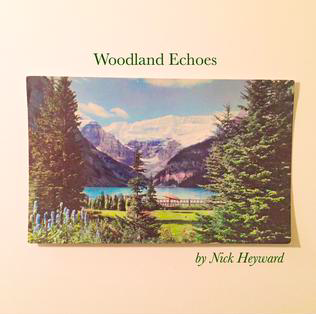 An artist who has always been well received by both critics and fans, Heyward is perhaps best known stateside as the lead singer and songwriter for Haircut 100, who earned four UK Top Ten and two US Top 40 singles with “Favourite Shirts (Boy Meets Girl),” “Love Plus One,” “Nobody’s Fool” and “Fantastic Day” from their debut album, Pelican West. After the band’s break-up, Heyward released three solo albums in the 80s, three in the 90s (including a 1998 release on Creation Records at the behest of Alan McGee) and two 2 collaborations in the aughts.  A 2013 announcement of new music was met with eager anticipation and Heyward set out to work on what would become Woodland Echoes, a piece of music MoJo called “an unhurried album full of paeans to passion and nature. Like his best solo work, his unmistakable Englishness is presented through an Americana filter”

Recorded at his son Oliver’s studio, on a houseboat in Key West, and Zak Starkey’s Salo Sound studio in the UK countryside, Nick deliberated over the music until he felt it was ready.  This album, like all of his work, is made with the same introspection and is heard on key tracks “Beautiful Morning.” “Love is the Key By the Sea,” “Who” and “Baby Blue Sky.” Heyward, who has always been singled out as a strong and thoughtful lyricist, continues his streak of songwriting success on Woodland Echoes.