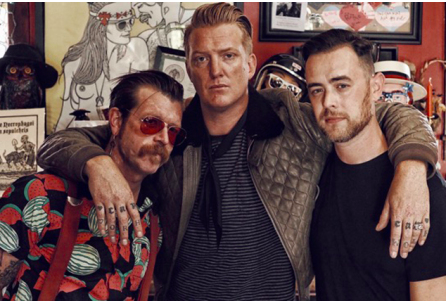 “I take it as a holy charge, this duty of leadership” says Eagles of Death Metal lead singer Jesse Hughes about the responsibility that has been left to him. It wasn’t something he asked for, but he accepts it fully. He is, of course, talking about the aftermath of what happened at the Le Bataclan Theatre in Paris on November 13, 2015, when a mass shooting took place in the middle of an EODM show. Three gunmen killed 89 people and injured 200.

“How do you go on with your life with something like that?” asks Hanks, speaking to entertainment website Deadline last week. Hanks, a longtime friends of Hughes and Eagles of Death metal co-founder Josh Homme, had just weeks to prep for Nos Amis, once all the financing was in place since he wanted to capture the band’s return to Paris after the attack. While the film doesn’t shy away from the tragedy, the movie is as much about the friendship between Hughes and childhood friend Homme. While Homme wasn’t with the band in France that night, he was right by Hughes’ side afterward, just as he had been when Hughes was picked on, constantly, by kids in school.

The film will be divided in to three parts: part one introduces the band to people who may not be familiar with their music, part two is about the attack at the Bataclan and the people who survived it, and part three shows the band getting back on the road.

The movie is set to air on HBO in February 2017, and will also have a theatrical release to qualify for the 2018 Oscars.