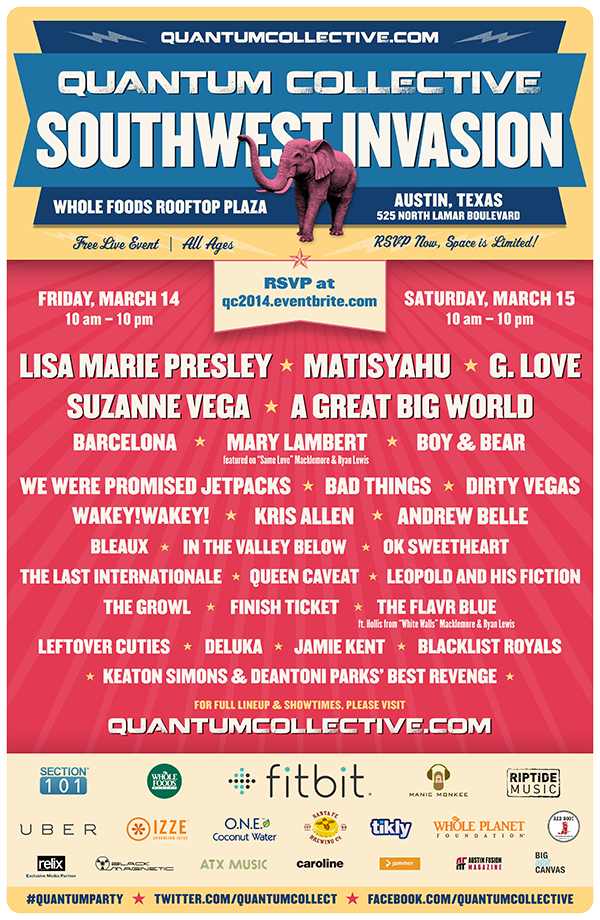 Fitbit has helped consumers all over the world make fitness a lifestyle with its award-winning family of products  that track activity and sleep. As empowerment and creativity are the un-official themes of the Southwest Invasion, Fitbit is the perfect collaborator. In addition to Quantum Collective’s remarkable roster of performing artists, they’ve built partnerships with Whole Foods, who promotes both the Southwest Invasion and a healthy lifestyle by only bringing food and drink that is sold in their stores to the event, as well as The Whole Planet Foundation, a charity that works to empower women entrepreneurs to change their own lives.

Says Quantum Collective and Manic Monkee founder Allie Shaw, “We’re so excited to have Fitbit as a lead sponsor of the Southwest Invasion. Fitbit exemplifies one of Quantum Collective’s key goals, which is to create real synergy between ‘brands and bands.’ Artists on the roster are going to be given a Fitbit activity tracker in advance of the two-day event so they can be true brand ambassadors. Health and Fitness is a huge and important market, and Fitbit is certainly no stranger to our space considering how many people burn calories while listening to music. They’re a great complement to this event, which is not only a platform for terrific performances; creativity, health and feeling good are the tent poles of the Southwest Invasion.”

For the third year in a row, the Quantum Collective presents the Southwest Invasion, one of the most talked about live music events of the year. This FREE, all ages event is open to the public, with two full days of music, food and fun from 10am - 10pm. Proceeds from the event will benefit the Whole Planet Foundation, which will use monies raised to empower women entrepreneurs to change their own lives.

With 32 acts performing over two full days, attendees will be able to enjoy 16 amazing performances each day. This year’s Southwest Invasion line up is as follows:

Last year’s artist performances can be viewed at https://QuantumCollective.com/.

RSVP is encouraged for the public at https://qc2014.eventbrite.com/.

The founders of Quantum Collective include:

Liz Leahy, CEO of Music Tech Company Section 101, which provides simple and effective solutions for music artists and brands to manage and maximize their online presence. Section 101 offers both a premium service and “Do-It-Yourself” website solution for musicians, authors, filmmakers and entertainment companies. Liz is instrumental in driving the Quantum Collective brand and her team provides all of the original creative design and direction for the event, online content, web design and hosting.

Dan Silver is VP of Creative and Sr. Producer at RipTide Music, a Sync focused Publishing Company who just announced their merger with pigFACTORY to create RIPTIDE MUSIC GROUP; specializing in worldwide placements for Advertising, Film, Television, Film Trailers, and Video Games. As co-founder, Dan’s unique approach to curating live talent for the Quantum Collective continues to yield a stellar two-day line-up including emerging and well-established artists. Also being an Artist and Producer himself, Dan brings artistic perspective as Co-producer of the event.

Allie Shaw, founder of Manic Monkee, an Artist Management, Brand Development, Sponsorship and Event Planning company.  She was recently named Chief Marketing Officer of Jammer.fm a platform that gives artists and brands that push content out to social media a dashboard to see all the consumer activity. Allie is instrumental in bringing together key sponsors and partners for the Quantum Collective.

Interested brand partners are welcome to inquire about the Southwest Invasion: [email protected]